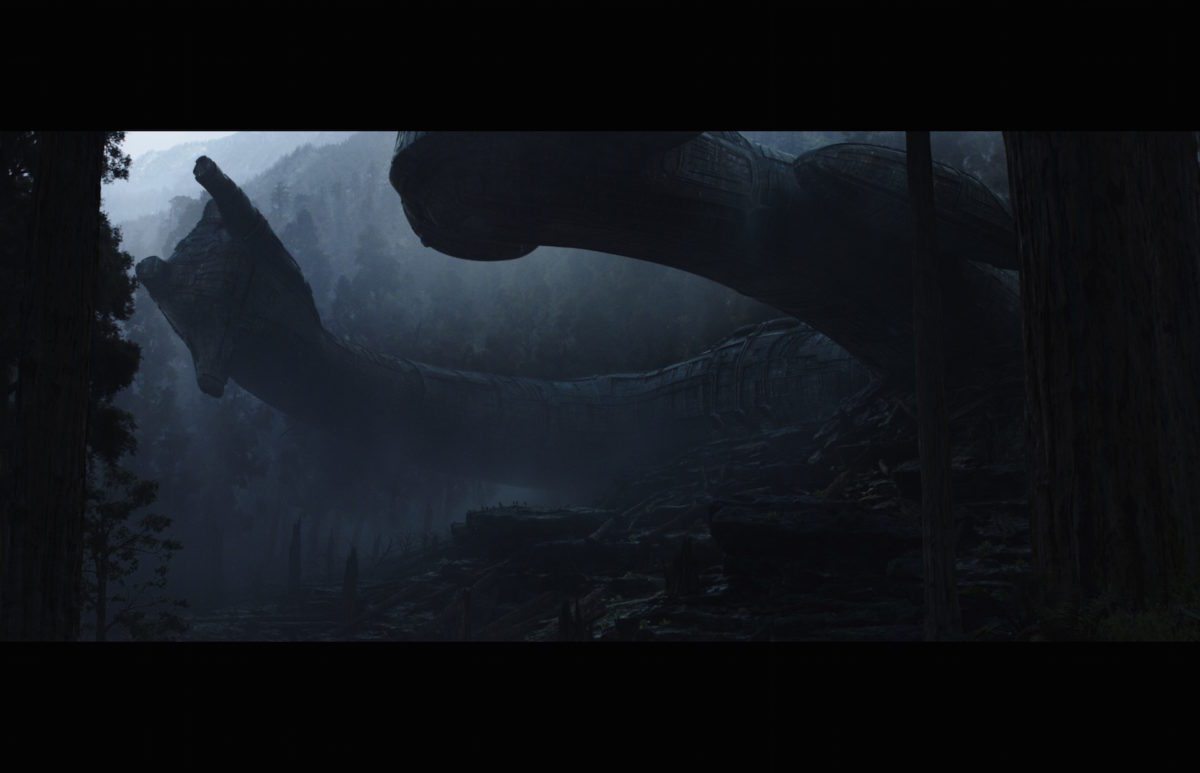 Director Ridley Scott along with VFX Supervisor Charley Henley have created another chapter to the Alien film franchise. Visual effects teams at lead studio MPC as well as Framestore, Animal Logic, Luma Pictures, Rising Sun Pictures, Atomic Fiction, Peerless, and Proof together created a computer-generated city, the mountainous environment strewn with 250,000 engineer corpses destroyed with black goo, multiple aliens, vehicles, and loads of effects work for both ground and space. MPC, who created over 700 shots, contributed the images and VFX breakdown for this blog. 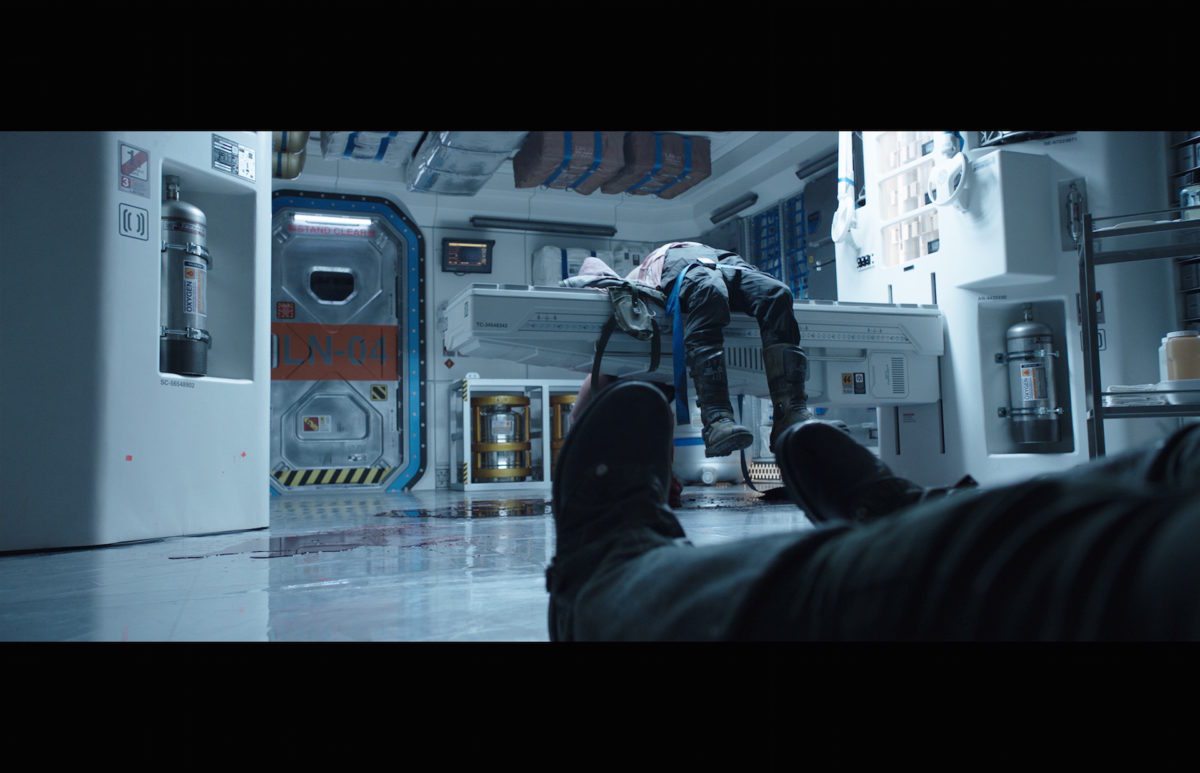 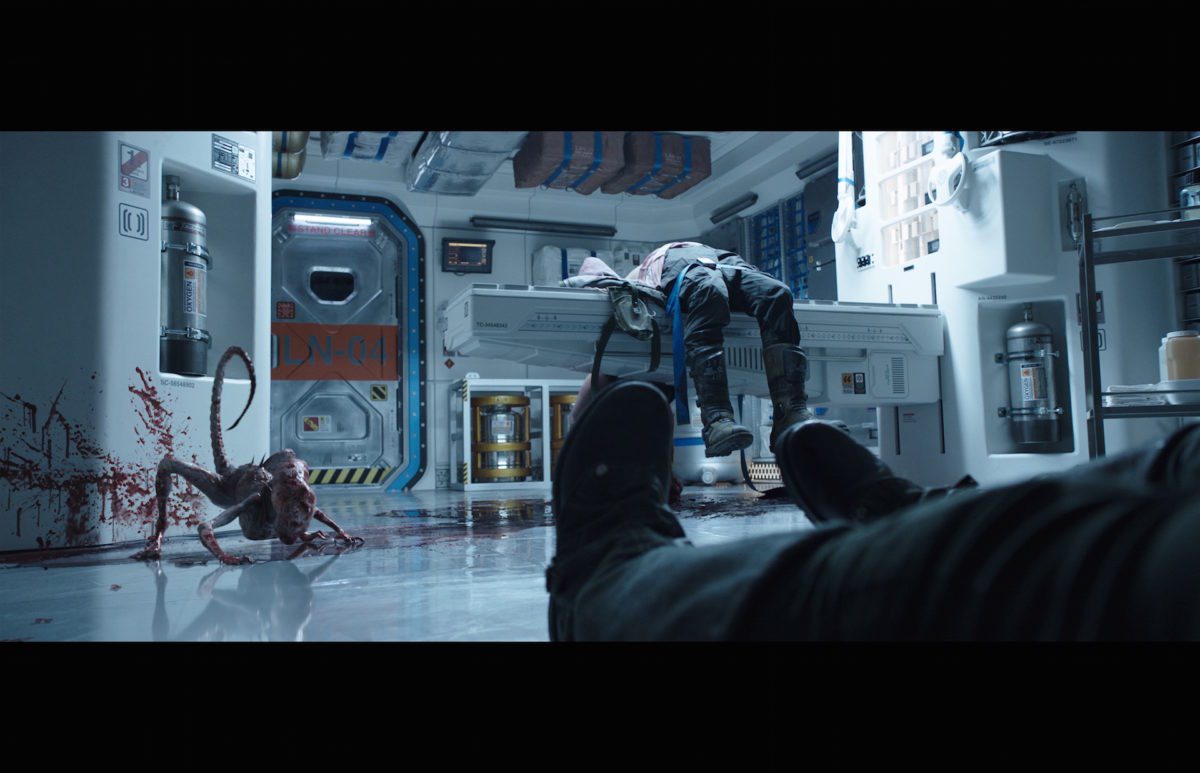 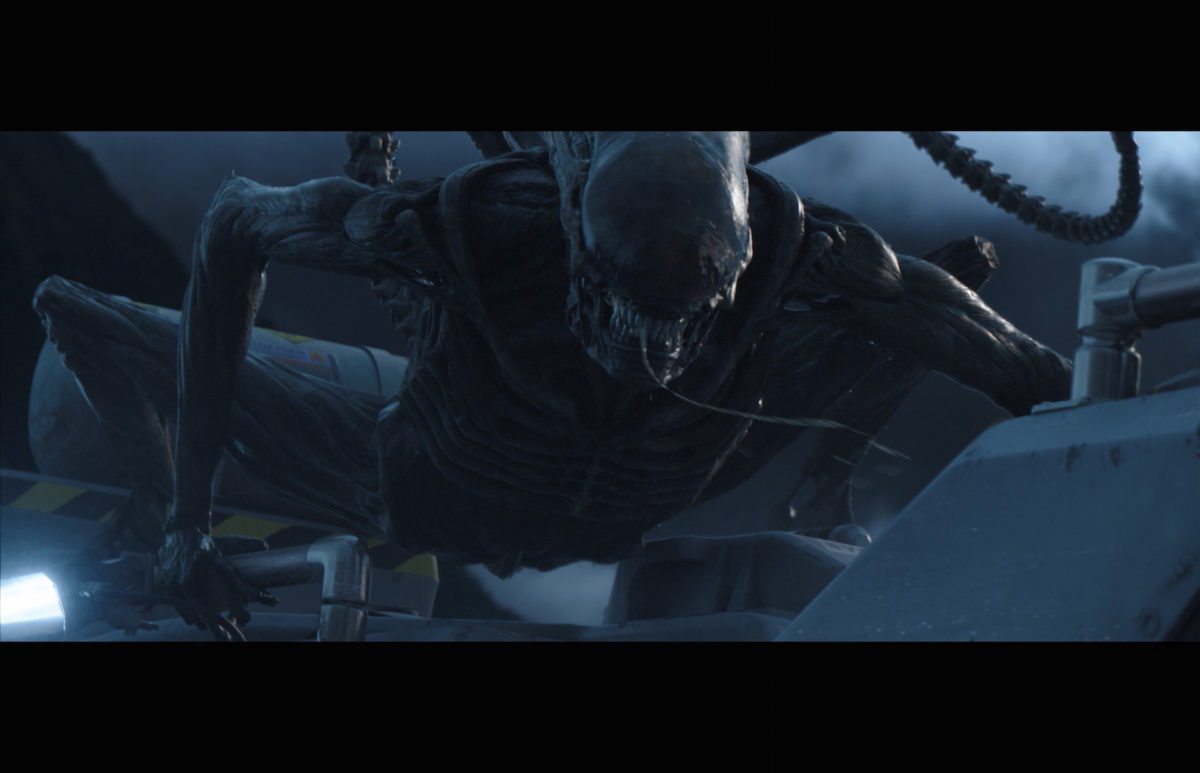 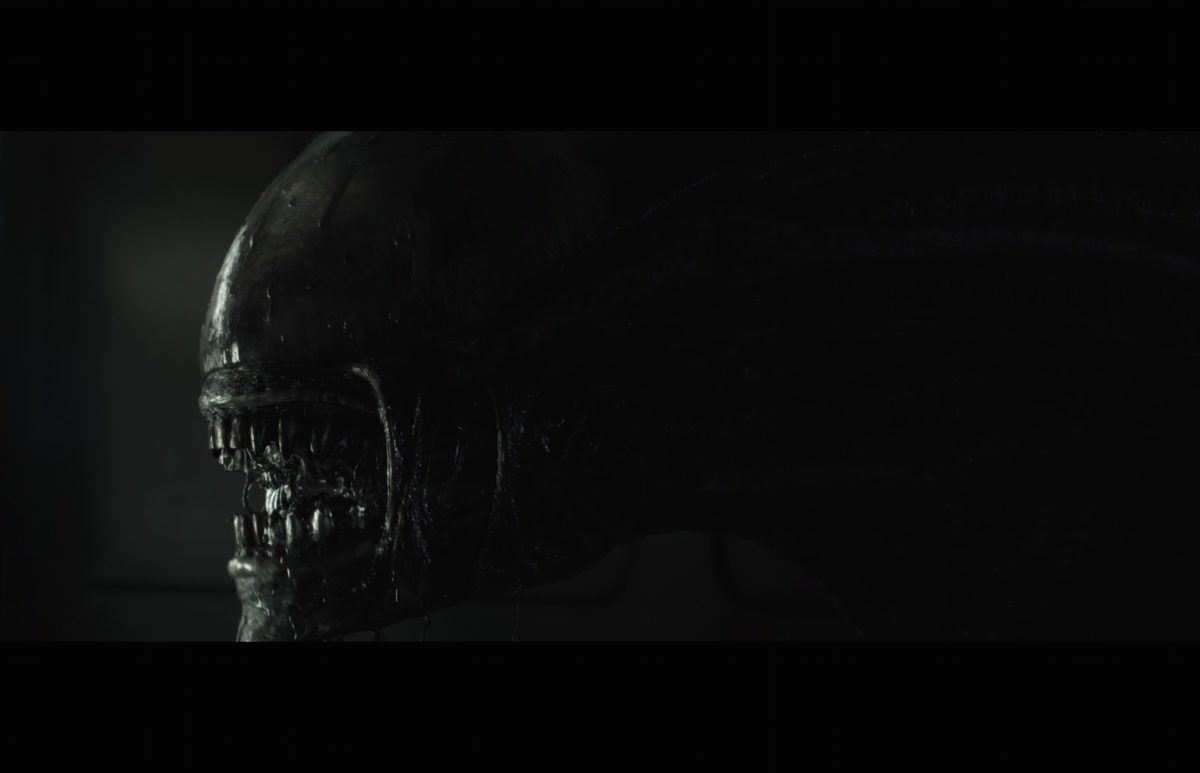 Since Prometheus, Ridley Scott had wanted to add a new version of the horrifying Xenomorph, the creature inspired by H.R Giger that has spawned, in a sense literally, the franchise as well as many a nightmare. This new addition, the Neomorph, was a pale-skinned humanoid with a large eyeless head, an emaciated body and a back covered in spikes. It’s somewhat human skin combined the look of dry and waxy translucence, thinly stretched over the creature’s muscles and areas of the skeletal structure such and elbows and ribs, creating a hollowed out, stretched appearance. By adding patchy areas of sweaty sheen, the underlying structure of digital muscles became more visible, creating a truly gross, horrifying impression.

This not-so-tender infant grows to a refined version of the well-known alien design for the original 1979 film. The rapid growth period goes from infant to young adult in just one minute of film time. The adult Xenomorph, standing at over eight feet, has more refined details in facial performance, non-human proportions and waxy appearance that were created using CG.

Scott wanted to avoid relying on a human-in-a-suit look to create movement that was more disturbing, with jointed limbs that no actor in a suit could replicate. For the Neomorph’s movements, the animation team drew inspiration from the jaws of goblin sharks, the praying mantis, and baboons, a physical animatronic, as well as extreme motion studies with actor Javier Botet whose work you may know from the short film, Mama. The creature animation did not resort to motion capture. Instead, the animation was keyframed through four rapid stages of growth from infant to adult, blending each stage seamlessly.

Each phase of the alien required appropriate movements and poses. The Neomorph’s strange hand and abdominal movements were based on Botet’s acting, who provided motion studies such as double jointed finger movements and stressed, fast breathing, all while wearing a hood on his head. Another extreme key pose reference was Alesandro Babari’s short film Metachaos.

As an infant, the eyeless Neomorph model implies the creature relies on some sort of sensory perception, requiring a specific style of animation. This differed from the adult Xenomorph who, as a full grown predator, had developed hunting behaviors with stereo eyesight. The adult Xenomorph behaved like a cold, brutal hunter with economic movements that engage only as needed. While it studied its prey, the Xenomorph’s animation portrayed stabilized head and upper body movements similar to those observed in birds and insects. When it attacks, it does so with blinding speed and pure savagery, much like a tiger attacks. The Xenomorph’s full sprint resembles the speed and movement of a greyhound, a tiger when running and jumping, and an ape when loping along. 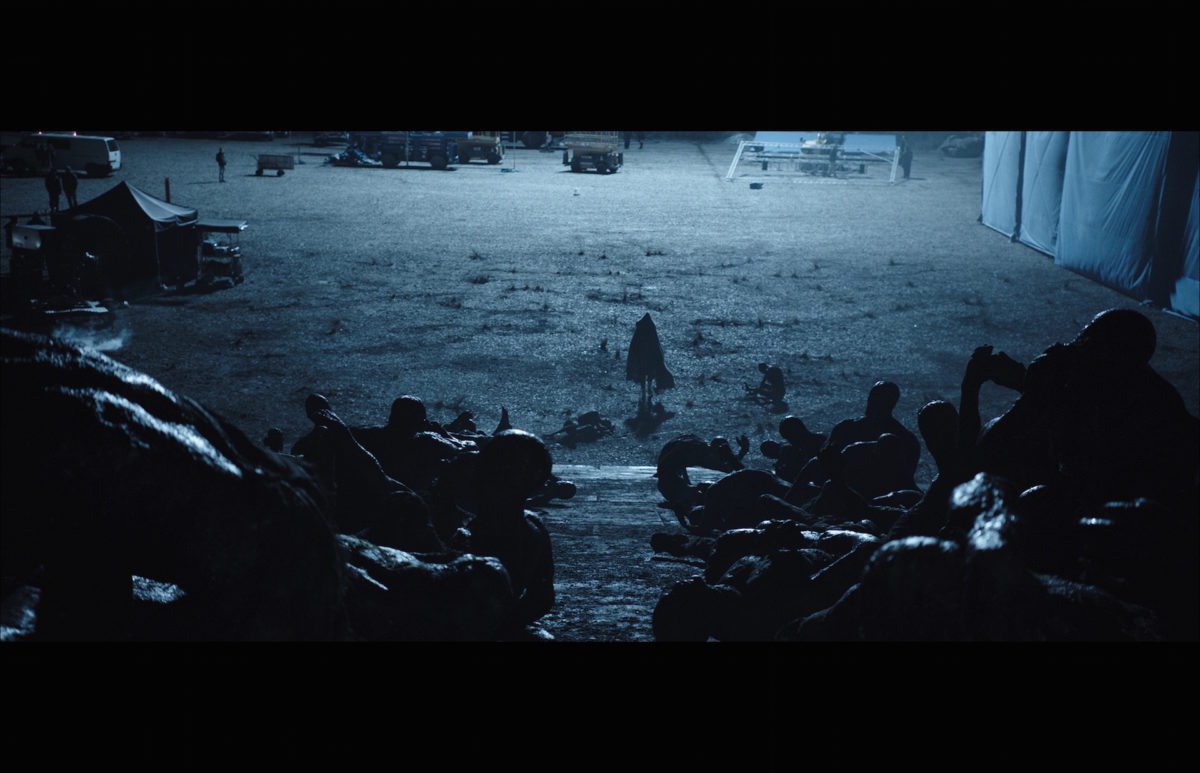 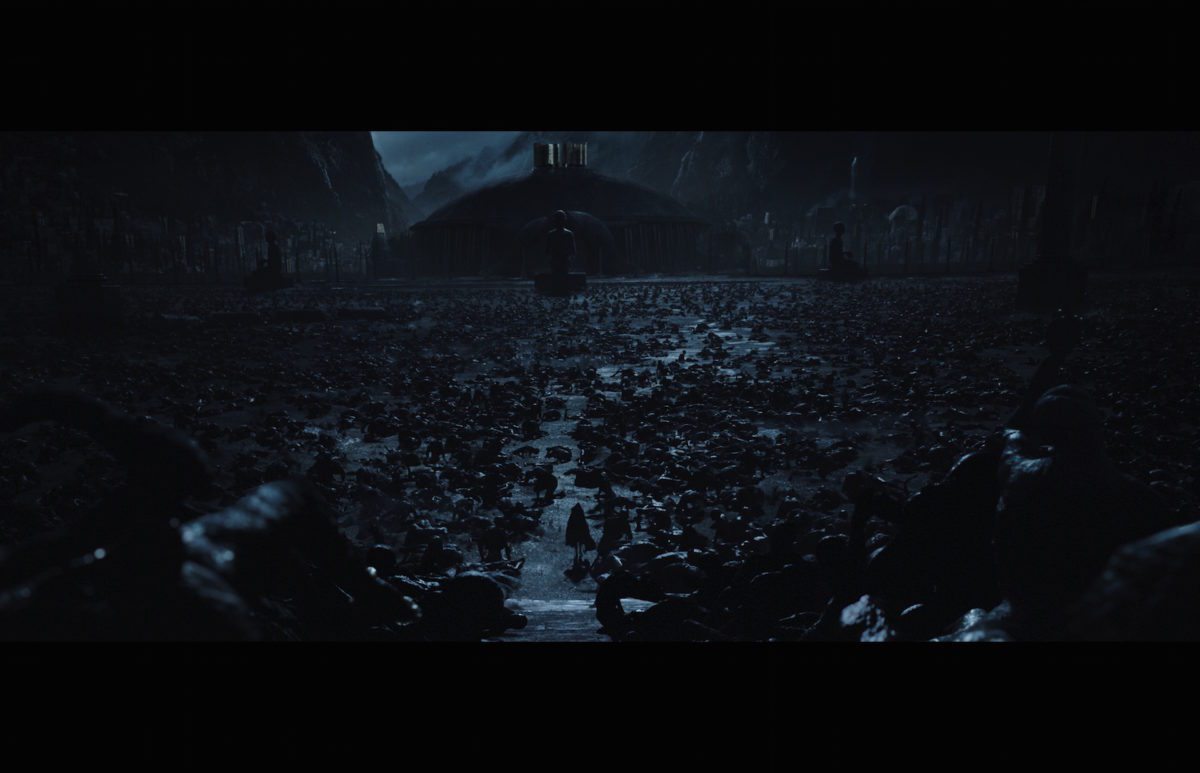 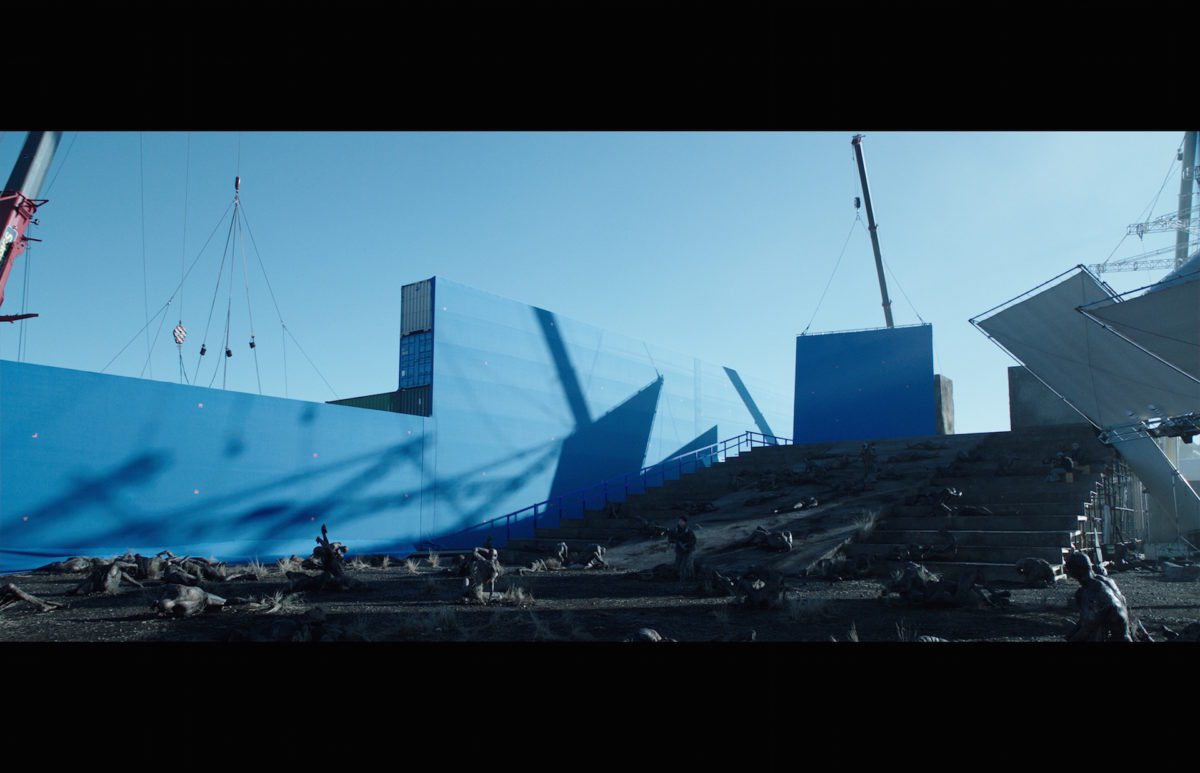 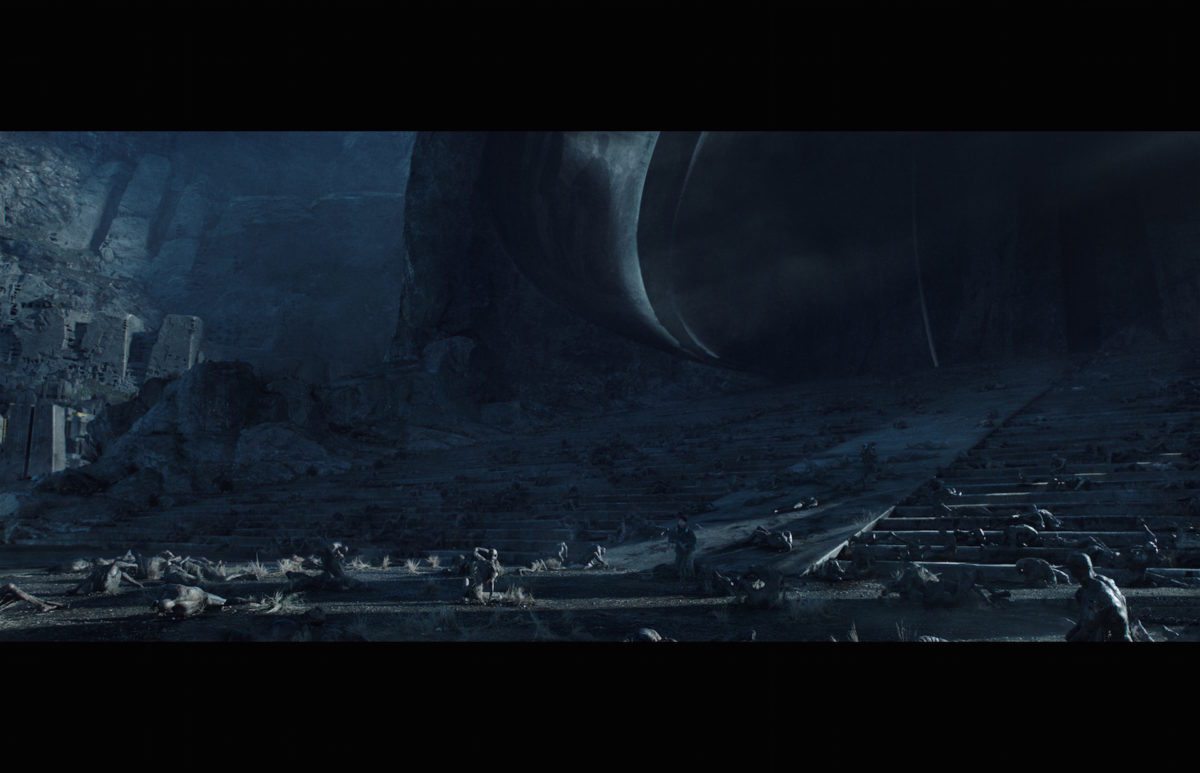 MPC’s most formidable environment was the massive city where the plaza was filled with the bodies of deceased engineers. To grasp the sense of scale, the team scrutinized a model of New York City, from Manhattan to Central Park, roughly six miles wide. The software team developed a new tool called “Machi”  (which means “city” in Japanese) to aid the creation of the first layout. It consisted of 15,000 buildings, a half million trees, and the 250,000 dead engineers strewn about the plaza. The team continued to refine these details until the very end of production. Technical animators added fine details from muscle deformations and twitches to the constant storms and movement caused by the resulting wind. As the lifter approaches the city, the thrusters blow the engineer corpses away in a cloud of dirt and gravel.

Nearly every shot had an FX element, some as many as 15, and though much of this work was done using MPC’s in-house tool, Kali, it also required the development of new FX tools. The list of FX included fluid simulations, animated textures, and lighting, sparks, gunfire, torches, volumes, explosions and more. To handle the load, MPC ramped up its Montreal FX team to one of the largest they ever required.

A MULTIPLAYER VR GAME IS COMING

MPC’s VFX Supervisor Ferran Domenech believes a strong back story and solid references are the best way for a team to maintain consistency of vision, so they made up a storyline based on what they knew from the films so far. Domenech stresses this was only for the artists, but there continues to be a great deal of speculation about the storyline and how each film links to the next. If you can’t wait for more Alien, there is some good news: MPC is working with Ridley Scott and Fox’s FoxNext Destinations location-based entertainment unit on Alien: Covenant in Utero, a multiplayer virtual reality experience based on the film.

The Alien Timeline in Chronological Order