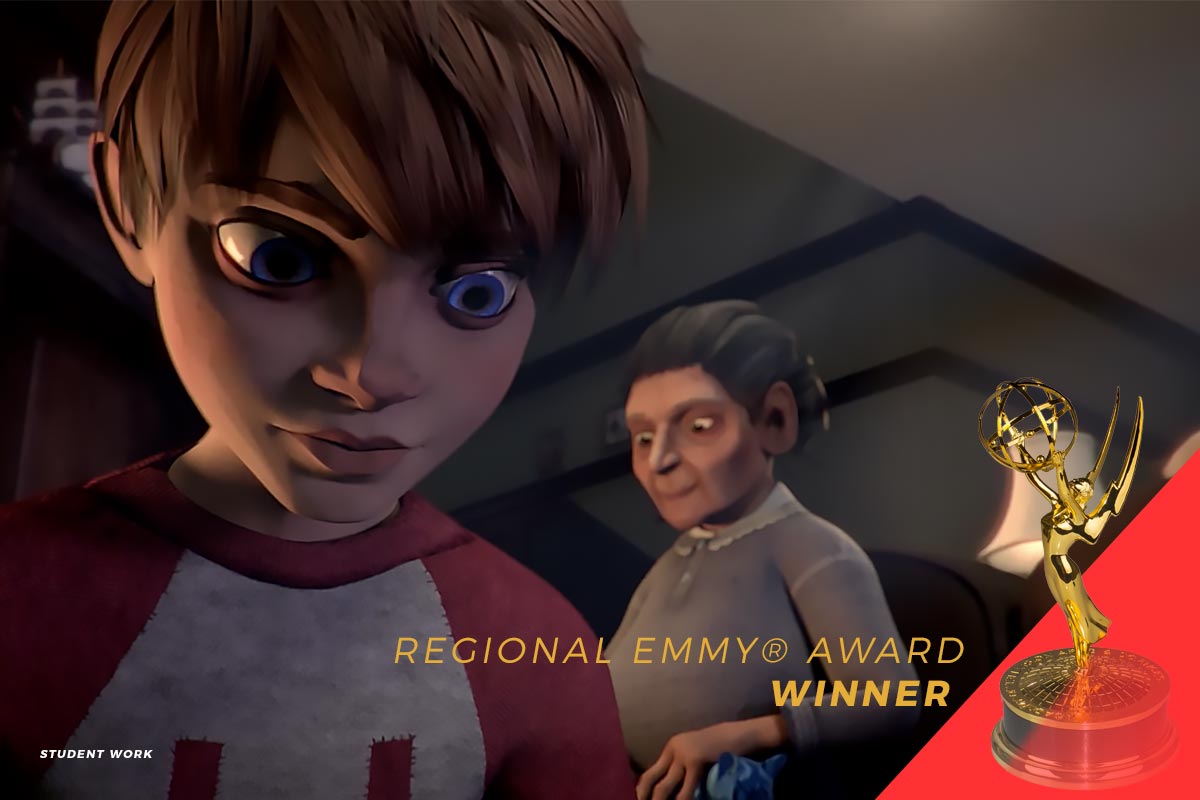 The Digital Animation and Visual Arts (DAVE) School instructor Matt Killian, recently walked across the stage to accept a coveted Regional EMMY® award in the category of Graphic Arts – Animation for “The Thief of Always,” a student-crewed project that he directed.

“I am thankful The DAVE School afforded me this opportunity,” said Killian, who accepted the award on Dec. 3 in Orlando. “I’m also grateful for the talented and energetic student artists that gave this project everything they had. I am fortunate that I get to do what I love with them. This project was the perfect opportunity to relive my favorite childhood book and share it with young readers.”

“The Thief of Always” is a fully animated short film based on a 1992 fable by Clive Barker. It is a book trailer, a medium similar to a movie trailer used to bring a book and its author to the readers’ attention. The project tells the story of 10-year-old Harvey Swick, who follows a strange nighttime visitor to a magical place named “The Holiday House,” where it is Halloween every night and Christmas every morning complete with gifts. Soon Harvey begins to realize things are not always what they seem, as there is a “Thief of Always” stealing the fun and imagination from all the children who visit there. To make things right, Harvey must make some hard decisions to save himself and his friends.

The Thief of Always – Book Trailer from The DAVE School on Vimeo.

“It was a great honor to work with this book,” said The DAVE School academic director, Angel Gonzalez. “Matt put together a really good script and storyboards to set the stage for the students. I am proud to see their hard work bringing in such a great honor. This experience is something they can take with them on their journeys to new careers.”

“Working on this project with fellow student artists was an invaluable experience,” said Travis Conklin, a DAVE School graduate who was part of the crew. “It not only inspired us to do our best, but it will hopefully inspire young readers and artists to follow their dreams and make them a reality.”

“It was an honor and a privilege to serve as the executive producer of such a unique project,” said The DAVE School Vice President of Academic Affairs, Dave Penn. “I am thrilled with our Emmy® and especially excited for our students who can now say they worked on an Emmy® Award-winning film which was also televised to inspire children to read, imagine and make positive choices.”

For 16 years, The DAVE School has been educating 3D artists on Sound Stage 25 on the Back Lot of Universal Studios Orlando®. “The Thief of Always” was created at the school with the participation of more than 30 students as a final project for the Visual Effects program under Killian’s direction. It took 11 weeks to complete.

The DAVE School donated copies of “The Thief of Always” to all 10 locations of the Boys and Girls Club Middle School Summer Zone program and to the Orange County Public Library system to inspire young readers in Central Florida. The trailer also aired this summer on Orange TV, the Orange County government’s information channel.

About The DAVE School (Digital Animation and Visual Effects): The DAVE School, located on the backlot of Universal Studios Florida in Sound Stage 25, includes a 35,000-square-foot facility that offers three labs, a shooting stage with a 65′ x 25′ green screen and a motion capture system. The DAVE School, which offers comprehensive training in 3D modeling and animation, game production, motion graphics creation, 3D visual effects production, and production programming, places graduates in the visual effects and gaming industries. The DAVE School is a division of Florida Technical College, an EduK Group institution. For more information, go to www.daveschool.com.