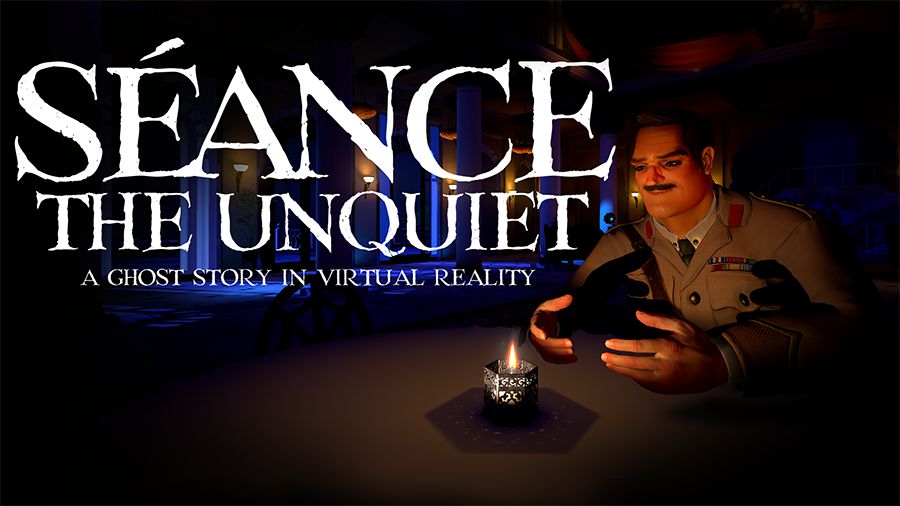 Small teams can make a big impact. Never underestimate what just a few talented creatives can do. Be they fellow students at the DAVE School or a group of pros thousands of miles away, believe you can accomplish marvelous things. Such was the drive at Holospark and their Virtual Reality ghost story game, Séance: The Unquiet. Holospark Art Director Bruce Sharp shares his story about a small team with big dreams.

“Séance is a subject idea we came up with in support of a larger vision we had for non-game VR experiences. It’s based on a vision I’d had for a possible new entertainment format which crosses a stage play with a dark ride.”

The team is made up of the bare essentials: art director, character artist, environment artist, mocap tech, producer, programmer, designer, audio engineer. Because of the small number of team members, some of these jobs are manned by the same person. “Stuart Cunningham has the broadest range. Stuart is an artist and programmer and a technical artist. He builds architecture, props, landscapes, shaders, and blueprints. Our biggest hurtle has been the small size of our team. For instance, I have a character artist but no rigger to rig his characters and no animator to make them come to life.”

TECH AND THE VALUE OF ARTISTS

Holospark works in the Unreal 4 engine because it supports VR and “it’s what we use as a studio for our non-VR projects—we’re a UE4 shop, you could say.” Art assets are created with the usual game production tools: Maya, Photoshop, and various production tools like TopoGun, Quixel, and 3D Coat. “Tools are important in that they can greatly reduce production times once your workflow and pipeline are established.” According to Sharp, working on production in VR isn’t any different than working on any other kind of real-time 3D game accept that you need a headset to evaluate your work in the proper scale. You want to use tools that your team is comfortable with, “but tools are just tools and by no means the magic ingredient – for the most part, they are interchangeable. We could just as easily have used MAX instead of Maya, Substance Painter instead of Photoshop.

“No, the magic ingredient is the team. It’s easy to fall into the trap of believing that art pipelines are simply art machines where the artists are the interchangeable part like workers in a factory. While that’s true in a vague sense, it’s not true from the POV of the artistic vision which is dependent on a delicate application of peoples’ artistic gifts. When you’re planning your artistic vision, you want to know who your team is artistically so you can shape your vision appropriately to get the best result.”

The Séance team knew character animation would be problematic. “With no budget allowing for hiring an animator,” says Sharp “we decided to look into a mocap solution. We’re currently figuring out the mocap-to-game animation pipeline. Frankly, we’re in unknown territory right now, not because no one has ever put mocap data into Unreal before, but because no one has ever done exactly what we’re doing with it.” 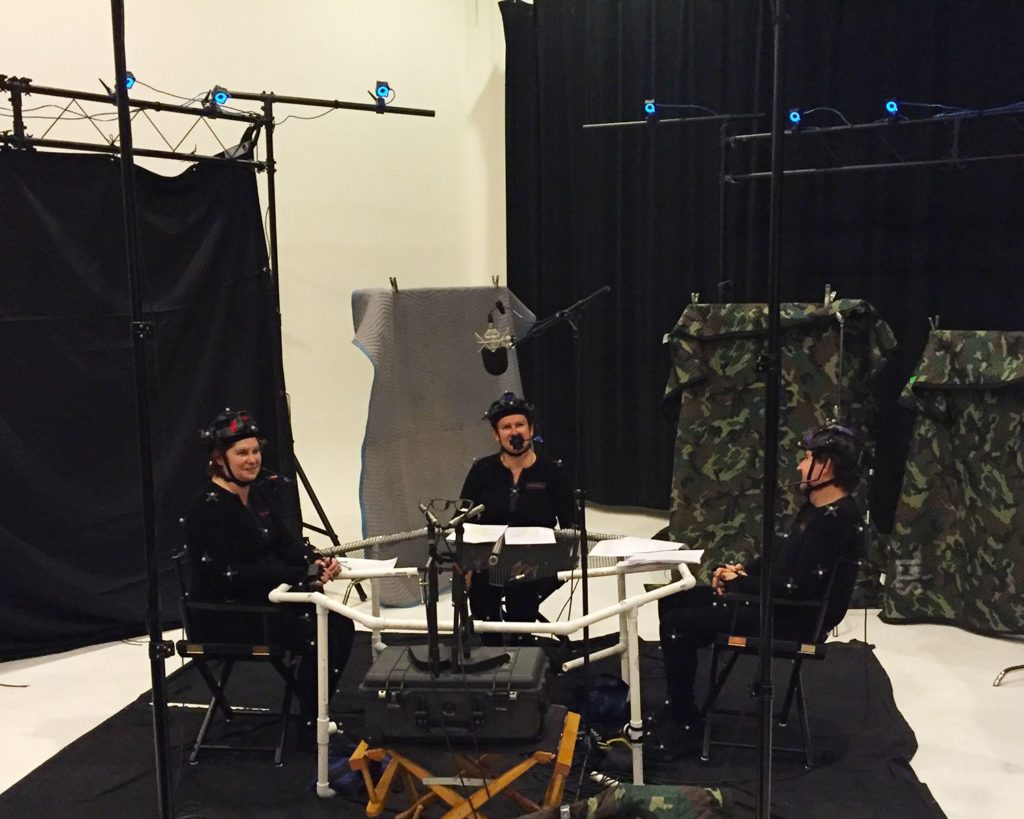 Holospark has found several tricks, such as building a prop table out of PVC pipe with a mesh top so the cameras could shoot through it to record the markers on seated performers. ©Holospark

Holospark simultaneously captures voice, body, and face motion, creating 3 separate files for each capture session. The audio portion is time stamped for sync with the other files and sent to audio engineer Keith Sjoquist. Mocap tech Patrick Connors processes the motion data in MotionBuilder and FaceWare. The data is then exported into the Unreal engine where Stuart Cunningham takes over to gamify it. “We don’t just use the capture data straight up,” says Sharp. “We add dynamic behavior into the mix that supports character awareness. Characters can make eye contact with you, etc, even when you move around in the space – they are aware of your presence.” 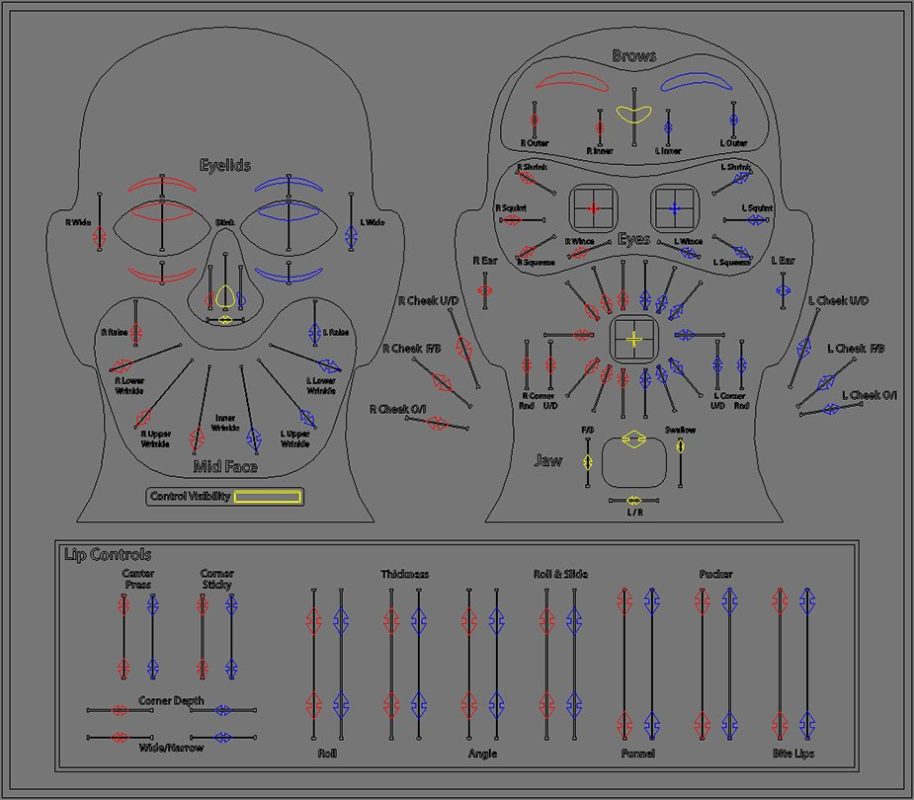 Individual joint controls for the face and the face tracking map. ©Holospark

VR is still very new and its market isn’t yet big enough to support large, expensive-to-make projects. There are very few headsets out there (somewhere between 500,000-700,000) and very few of those are actually in the hands of consumers. Most are owned by other VR development studios, studios like Holosharp (who has ten) or by other types of businesses. Many are owned by education facilities, such as the DAVE School. The number of VR headsets owned by actual consumers is not known but is probably quite small. Consequently, making a costly product right now might mean there aren’t enough customers to make a profit. But it doesn’t mean there won’t be, and that learning all you can about this new tech won’t put you miles ahead of the curve. Says Sharp, “We believe that VR is not only the future of gaming but the future of TV in general.”

Profit-Sharing Opportunities – Are They Worth It For Students?

Kick-start your career at the DAVE School